Termite Flatulence in the News

TERRY CLARK, whose family runs a pest-control empire in Stockton, Calif., believes he has a better way to find termites: monitoring the methane they expel. “Termites eat a lot of roughage so they have a huge gas problem,” Mr. Clark said. 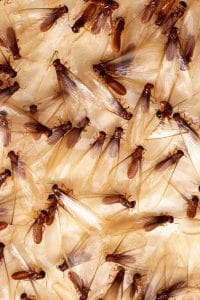 Many different technologies — from sonar to X-ray — have been deployed to detect termites, with varying success. What makes termites so insidious is that they can munch their way through the innards of a house undetected. Some winged termites swarm to the surface during spring (one reason, Mr. Clark noted, that April is National Pest Control Month). But often termites are so stealthy that for a long time the homeowner does not see so much as a wood crumb.

And Mr. Clark, 40, who is a vice president of Clark Pest Control, is by no means the first to try methane detection. In 1982, four scientists from three continents collaborated on a paper published in Science magazine that estimated that flatulence from termites might be responsible for as much as 30 percent of the methane in the earth’s atmosphere. Since then, the level of termite-produced methane (and its possible contribution to global warming) has been a matter of fierce scientific contention.

The pest-control industry, however, seems to agree that the presence of methane is a legitimate way to track termites. Some use trained beagles to detect it. And some handheld electronic termite “sniffers” are already on the market. But those are supposed to detect methane within the house, according to Mr. Clark, while his system is designed to detect and kill termites before they get to the house.

To monitor termite activity, Mr. Clark will ring a house with a couple dozen of his devices, which are shaped somewhat like giant plastic tacks and pushed into the ground. The flat disk-like top shades the ground, giving termites, which are thermally sensitive, the impression that a nice juicy piece of cellulose might be sitting on the ground above. At the top is a methane sensor — which Mr. Clark did not invent and which he buys off the shelf. Inside the spike end of the device is a wood stake with a cardboard collar.

“Cardboard is the junk food of termites,” Mr. Clark said. But this is no free meal. If the pest-control expert sees that the methane has collected on his monthly rounds, the cardboard and wood stake are infused with a mild poison called Premise, which the termites haul back and use to stock the colony larder.

Would this approach work with other pests? After all, “cockroaches are no slackers when it comes to producing methane,” May R. Berenbaum observed in her book “Buzzwords: A Scientist Muses on Sex, Bugs, and Rock ‘n’ Roll.” So far, however, no patents appear to have been granted for such a concept.

Mr. Clark is skeptical of this approach when it comes to cockroaches. “Cockroaches are not as well hidden as termites,” he said. “You know when they are there.” Last month, Mr. Clark received U.S. patent 6,526,692. About 50 miles west of Mr. Clark, in Palo Alto, Robert Neumann wields an entirely different weapon in the war against termites: hot chile peppers.

To be more precise, Mr. Neumann recently received his third United States patent for the use of capsaicin — the oily, alkaline substance that makes peppers hot — as a natural insecticide. Mr. Neumann, 42, who works as a pest-control inspector for Franz Termite Control, said he first came up with the idea after talking to a California Highway Patrol officer who was giving a lecture to termite inspectors on transporting hazardous chemicals.

During a break, the officer described how he had subdued a suspect with pepper spray, and the proverbial lightbulb went off over Mr. Neumann’s head. The next day he brought some termites home, mixed up a chile pepper concoction and sprayed them. The capsaicin burned them, killing them almost instantly. “Some of my friends saw what I was doing and laughed, saying I was spending too much time on bugs and needed a vacation,” Mr. Neumann recalled.

They are not laughing anymore, he says. His patents are the basis for a new company, Kapto Inc., a biopesticide company in Belmont, Calif. It has two products for pest-control professionals that, pending approval from the Environmental Protection Agency, are expected to be on the market in about four months. He received U.S. patent 6,523,298 in February.